The Legend of Nimway Hall

When Alexandra Hayden, the current Guardian of Nimway Hall meets American                        Robert Curtis, he thinks she’s a servant and she thinks there’s something just plain wrong about the very idea of the new Viscount Brynmore being American. . .

“Allow me to introduce myself. I’m Robert Curtis, now Viscount Brynmore.” He extended a hand.

Alex reluctantly took his hand. “Yes, I know who you are.”

He paused, then his smile widened. “You’re the girl from the garden.”

“Indeed I am,” she said and pulled her hand away. “I’m Alexandra Hayden.”

“It’s a pleasure to meet you.” He leaned closer, and for the merest of moments, she had the most absurd thought that he intended to kiss her. He reached out, and her immediate impulse was to step back or slap his hand away. Instead, for some unfathomable reason, she froze. He plucked something from her hair and held out a small leaf. He grinned, and the look in his blue eyes did the most disconcerting things to the pit of her stomach. “You didn’t need to change for me.”

“You are a guest at Nimway, my lord,” she said in a lofty manner. “It’s only courteous to greet you accordingly.”

He glanced at the candlestick and apparently decided to ignore it. “You’re not an employee of the estate, then?”

“No, I’m not.” She could have, and probably should have, offered more in the way of an explanation as to who she was and her connection to Nimway, but it did seem best not to offer too much information until she knew what he wanted.

“Alexandra Hayden. I believe I told you that a moment ago. Nimway is my home.” She set the candlestick on the mantel. “Now, how can I help you, my lord?”

“As I’ve said, I would like to meet the owner of the estate. I have a matter of business to discuss with him that I believe might benefit him greatly.” He paused. “I assume that’s your father?”

“I see.” He nodded. “Well, then I should probably speak to your husband.”

He frowned. “Then who owns this place?”

“I’m not sure exactly. Wilcox said this estate had been in the same family for generations. I just assumed it would be passed from father to son. Isn’t that how it usually works in England?”

“Nimway is not a usual property. It has always passed from mother to daughter.”

“You do need to stop looking quite so shocked at everything I say, my lord. It gives me the upper hand, and I suspect you’re not the kind of man who appreciates that.”

He grinned. “I never have been before.”

“As you have business you wish to discuss, I suggest we return to the parlor. Or the library if you prefer.”

“The parlor it is, then.” She turned and headed for the parlor, assuming he was following.

“It’s a great house,” he said behind her.

“Indeed it is.” Why was the man so concerned with the house?

They stepped into the parlor. Alex settled in a chair and indicated the American should sit on the sofa. It put him at a slightly lower level than she, which she’d found to be most effective when dealing with anyone. Unfortunately, his lordship was tall enough that there was little difference in their respective heights. Pity.

“Now then, my lord.” She adopted a pleasant smile, poured a cup of tea, and handed it to him. “Why were you snooping around my house in a most discourteous manner?”

“It was, wasn’t it?” He winced. “You’re absolutely right. I wasn’t thinking. Please accept my apologies. But it is a delightful house.”

“We have always thought so,” she said, not the tiniest bit mollified, although he did seem sincere. But then she was not the best judge of men. Wiser to guard against all men rather than be taken in by one more. She refused to make another mistake. She poured a cup for herself. “You said you had a matter of business to discuss.”

“I do.” He studied her thoughtfully. “I was wondering if you would consider selling.”

“The house. Nimway Hall. And the property, too, of course,” he added.

For a moment, she couldn’t say a word.

She stared, at once regretting she had left the candlestick in the dining room and yet somewhat grateful. Smashing a candlestick over the head of a newly met neighbor—no matter how annoying he might be—wasn’t the least bit welcoming. “Are you mad?”

“I intend to make you an excellent offer.”

“There is no offer excellent enough!”

“Come now, Miss Hayden. According to what I’ve heard, you are experiencing financial difficulties at the moment.”

Brian! Alex resolved to thrash him thoroughly as soon as possible. But losing her temper now would not do anyone any good. She took a sip of tea and forced a measure of calm. “I assure you, my lord, your information is not entirely accurate.”

“I understood every property owner in England is having problems to one extent or another.”

“You really shouldn’t believe everything you hear.” Not that he wasn’t right, although every property owner might be an exaggeration.

He chuckled. “That would indeed be foolish.”

“Have you been to Brynmore lately?”

“Quite frankly, I can’t remember a time when there was anyone living there.”

“I assure you, no one would want to live there now.” He shook his head. “The house is falling down, and the grounds are appalling. The property is past the point of needing mere maintenance. We were hoping to use the estate to entertain and as a place for a tranquil retreat in the English countryside. My family is very excited at the prospect.” He glanced around the parlor. “This place is perfect. Grand and yet welcoming. It feels like home.”

“Perhaps because it is a home. My home. It has been my home for my entire life. It was my mother’s home and her mother’s before that and so on. It’s said Nimway was built on the very site of Nimue’s cottage.”

“You don’t know who Nimue was?” And really, what could one expect from an American?

“Nimue was a powerful sorceress, the consort and true love of Merlin.”

“There is no other Merlin that I’m aware of. So yes, Arthur’s Merlin.” She rolled her gaze toward the ceiling. Did they teach nothing of importance in America? “My family descends directly from Merlin and Nimue. The spelling is different, but the estate takes its name from her. The hall is said to have been built over her cottage.”

“What an excellent story.”

“It’s not a story.” She huffed. “It’s my family’s legacy.”
“A house with a connection to legendary characters,” he said, almost more to himself than to her, as if he were calculating the value of her family’s heritage. “My mother will love that.”

“Perhaps we need to discuss exactly what I’m willing to pay.”

“It doesn’t matter.” She shook her head. “Nimway is not for sale.”

“It’s been my experience that everything is for sale for the right price.”

Alex clenched her teeth. “What part of ‘Nimway is not for sale’ do you not understand?”

“What I understand, Miss Hayden”—he leaned forward and met her gaze directly—“is that in spite of your protests, it’s obvious just from my brief look around that time is taking its toll on Nimway and you don’t have the financial resources for basic maintenance. Might I point out you were weeding the garden when I arrived.”

“I like weeding the garden, and my finances are none of your concern.” Alex rose to her feet. “I suggest if you want a country house, you put your own in order. It’s been my experience that anything can be put to rights with enough funding. Perhaps you should take the money you intended to spend on Nimway and use it for Brynmore. As I said, Nimway is not for sale, nor will it ever be.”

“Then this shall be a new experience for you.” She nodded at the door. “Pearson will see you out.”

He grinned. It was very nearly irresistible if one was taken in by a winning smile, blue eyes, and an air of relaxed confidence. Alex was not.

“Are you throwing me out, Miss Hayden?”

“Not at all, your lordship. I simply assume you’re a busy man and have other matters to attend to, as do I.”

“I see.” He considered her thoughtfully. “I’ll leave my card and my solicitor’s with your butler on my way out should you change your mind.”

“Only a fool wagers on something he does not expect to win, and I would hate to see you lose.” He smiled, took her hand, and raised it to his lips.

The most absurd sensation raced through her at his touch.

“It was a pleasure to meet you.”

She tugged her hand free. “I know it will linger in my memory.”

“Our paths will cross again.”

“I daresay that’s inevitable regardless of our best efforts.” She shrugged. “You do own the property next to mine.”

He chuckled. Apparently, the man found her most amusing. “Good day, Miss Hayden.”

Alex maintained her perfectly composed expression until the door had closed behind him, then she rushed to the window to make certain the man was actually leaving. She wouldn’t put it past the American to assess the property just as he’d inspected the house. Sell Nimway indeed!

Brynmore climbed into his carriage, and Alex had to admit he was a fine figure of a man. He settled in his seat then glanced directly at her and tipped his hat. She resisted the urge to jump behind the drapery and instead nodded coolly. After all, this was her property, her country, and her world. She didn’t care what title he had inherited, an overconfident American had no place in it.

Worse than the man’s arrogance was the fact that he was right about the state of Nimway Hall and her finances. She was well aware of every water-stained ceiling, every bit of peeling paint and faded wallpaper in the house. It didn’t seem that things looked especially worse than they always had, but perhaps now that she didn’t have the money for even minor repairs, she was seeing it all with fresh eyes. She was more aware than ever just how much needed to be done. Alex had managed to keep up until the Julian fiasco, but everything had deteriorated rapidly after that. Relatively trifling matters she’d put off then had now grown to larger problems. The outbuildings—the stables and dairy and smokehouse—all needed work but were holding up better than the hall itself. She’d used most of her dowry to fund work on the tenant houses and had been forced to take out a few small loans to pay the staff a bit extra before she let them go.

The idea of selling Nimway was out of the question. The estate had been through hard times in the past and would weather these days as well. All Alex needed was an influx of funds to tide things over until harvests and crop prices and all the other factors that were contributing to the country’s current depression improved. All she needed was a miracle. Or a dose of Nimway magic.

Neither of which seemed even remotely possible. 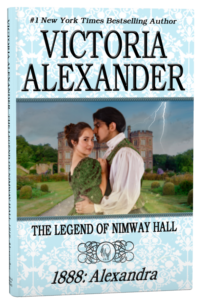