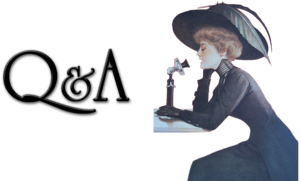 Where do you get your ideas?

That’s probably the question I’m asked most often. People are naturally curious about those of us who make up stories. So, here’s a sampling of questions and answers.

Tell us more about yourself.

Well, let’s see. I’ve been married forever to the same guy although I do love referring to him as my first husband. I have two grown children that I’m very proud of. I live in Omaha, Nebraska in an old house under constant renovation because it’s constantly in need of something. I am a definite dog person and have two bearded collies who are always underfoot and very, very vocal.

My first career was as a television news reporter. I covered all sort of fascinating stories and met all sorts of interesting people. The only time I miss it now is on election nights or when there’s a big natural disaster. Then I still feel something of an itch to be in the thick of it. I lay down until the feeling passes.

I like baseball because I like the history and tradition of it but the only sport I really follow is college football. And that only when my team is doing well. I am the ultimate fair weather fan. I like to garden but while I’m very enthusiastic in the spring, by mid-summer I’m usually looking at dried and dying plants and thinking “just wait until next year.” I’m that way about football too.

I collect all sorts of things including old books and old napkin rings engraved with names and vintage illustrations.

If you have 2 hours free time tonight, what would you rather do? Why?

I would have girlfriends over to watch a movie—chick flicks or romantic comedy. Why? Because I don’t get to see my friends as often as I would like and I love movies. Especially older romantic comedies.

What kind of books do you love to read?

I love to read anything that encompasses a good story. I mostly read contemporary—preferably romantic comedy—and suspense. I love well written erotica especially if it has a fantasy or paranormal twist. I’ve never been into vampires but I do like paranormals—especially if they’re funny. I rarely read historicals, probably because that’s the world I work in.

What type of music do you relax to?

I prefer what I think of as classic rock like Bob Seegar, Carole King, Cher, ABBA, Billy Joel. My all time favorite artist is Jim Croce. What an amazing storyteller

If I play music when I write it’s usually appropriate to the period so it’s generally classical but I do love movie soundtracks. I can’t write to anything that has words—it totally distracts me because I tend to sing along. Usually, I write with the television on. My training was in a tv newsroom so I automatically block out noise. I can’t work when it’s too quiet.

What is your favorite food?

I am on a perpetual diet so virtually anything with more than 10 calories is my favorite. I love barbeque, grilled meats and rich, red wines. I love Italian food. A few years ago, my husband and I went to a cooking school in Tuscany. We learned a lot, had a great time and ate fabulous food.

Describe yourself in one word.

I’m a writer—I can’t possibly describe anything in one word. And frankly—whatever word I might write at the moment will be completely inaccurate tomorrow.

What’s your biggest regret in life?

Tough question. I don’t really have any regrets. Sometimes I wish I had started writing fiction earlier than I did but then I would have missed being a reporter and working in television. And I would hate to have missed that.

What is the most adventurous thing you’ve ever done?

White water rafting. If I do have any regrets, it’s that I haven’t rafted the Grand Canyon—yet.

How would readers find out more about you?

Talk to my husband, my kids, my friends, my editor, my contractor, better yet—talk to me! Come up to me at a book signing or a conference, I love talking to readers.

When did you write your first book?

1993—a time travel to Regency England called Yesterday and Forever.

How long did it take you to write it?

About six months. I was a full time reporter and wrote on my lunch hour, after work and sometimes during very boring city council meetings.

Did you encounter any obstacles in writing?

Other than the fact that I had no idea what I was doing—not really.

Where and when do you write?

I have turned a sunroom off my living room into my office. I do most of my writing there. I try to keep real life work hours—from about 8:30 to 5 unless I’m close to a deadline. Then, I’m at the computer all day and most of the evening.

What is your advice for aspiring writers?

Don’t give up. You improve with every word you write.

What genre(s) do you write?

I’ve written all sorts of things. I have written time-travel, reincarnation, contemporary and now I’m pretty much focused on historicals.

Of your books—which is your favorite and why?

My favorite is always the book I’ve just finished because I think it’s the best book I’ve written. But I am especially fond of Same Time, Next Christmas probably because it’s written in first person—entirely from the point of view of the heroine. I think that makes the story really personal.

How long does it take you to write a book?

Six to eight months. I try to write two a year.

Which of your books feature your family/friends, etc? What characters are modeled after them? Why?

I don’t really have family and friends in my books although sometimes I will name characters after friends. In Desires of a Perfect Lady, I named three footmen after three of my husband’s friends. And when I have a dead husband in a book, and we’re not glad he’s dead—I mean he wasn’t evil or anything—I name him after my husband. His name is Chuck and I have dead Charleses in most of my books. I think it keeps him on his toes.

Which of your heroes/heroines is most similar to you?

My heroines are usually who I want to be rather than who I am. I did run this question past my friend Mariah Stewart. She said my heroines all have my mouth.

Have you ever wanted to write your book in one direction but your characters wanted to go in another direction. What did you do in such a situation?

Constantly. When that happens, I go in the path my characters take me. It is their story after all and I think it makes it a better story.

Where do you get your ideas?

Ideas are easy, spinning them into a full length book is hard. But ideas are everywhere. You just have to be open to them. You might see a couple meeting at the airport or having a fight in a restaurant that will trigger a story idea. I pick up things at garage sales that provide inspiration—antique photographs or old programs or a piece of jewelry that looks like the kind of thing that might have a curse on it. (But that would be fiction, in real life it’s just, well, ugly.) I’ve saved news stories that give me ideas, as well as a few obituaries. Random conversations have given me ideas as well as odd things that have happened to me. I once saw what looked like a wedding dress—white satin and lace—stuff in a trash can at a convenience store. Very often, what I end up writing bears no resemblance to the inspiration.

And once you have them, how to edit/massage them into a viable, marketable idea for fiction?

This is a really tough question and I’m not sure I have a good answer. When I write a book, an idea triggers it but usually becomes merely an element.

In The Perfect Wife, I wanted to write about two people who had a history of being on opposite sides. So I made her a smuggler and he was a government agent, a decade before the story actually starts.

For The Seduction of a Proper Gentleman I started with an idea I’ve had in mind for years. I’ve always wanted to write a book about a character faking amnesia. But the farther I got into the book, the more I realized fake amnesia wasn’t working. It made my heroine a lying, deceitful manipulator. Even I didn’t like her. So I gave her real amnesia that might well have been caused by magic. Which worked nicely since there was already magic in her family and a curse.

The heroes in the the Last Man Standing series are all part of a tontine—something else I’ve always wanted to do. The idea of a tontine came from old movies where now elderly war buddies have invested in a fine old bottle of wine. Whoever lives longest wins the bottle and is supposed to drink to his fallen comrades. In my series, the winnings include an excellent bottle of cognac as well as a token four shillings. And for my tontine, the last man to marry is the last man standing but instead of the others dying off, they all live happily ever after. Works much better!

My Lady Travelers Series comes from a combination of my love of travel and my fascination with 19th century lady travelers. Getting from point A to point B in 1889 was a lot harder then and travel required determination and sometimes courage. But what fun!

Where are you from originally?

I’m an Air Force brat so I grew up all over. But I was born in Washington, DC.

How has being an author affected your life?

The biggest thing is that I now work at home. I can set my own hours. In that respect, it has given me a tremendous amount of freedom. But it’s also meant I’ve had to develop greater self-discipline. I’m the one who has to tell me to get to work!