The Importance of Being Wicked

an excerpt in which the reputedly wicked Lord Stillwell meets the very proper Lady Garrett on the grounds of his fire ravaged family home. . .

“You have me at a disadvantage, I’m afraid.” Win peered around the woman, who had introduced herself as Lady Garret, at the carriage he had sent to fetch the representative of Garret and Tempest from the train. The carriage had stopped at the foot of the circular drive, discharged the lady and appeared to be empty of additional occupants. “Lady Garret—” He glanced down at her or rather where she had been a moment ago. She was now striding toward Fairborough Hall.

He hurried after her. “I say, Lady Garret, I was not expecting—”

“You were not expecting a female,” she said over her shoulder. She carried a paperboard tube and a satchel and was pretty enough in an ordinary sort of way. The kind of woman one would glance at approvingly but might not look at a second time. Her clothing, while obviously of quality, was a few years out of fashion, and nondescript in color and style. She was a good six inches shorter than he with hair a warm shade of walnut worn in a severe manner under an entirely too sensible hat and eyes that were neither green nor brown, or perhaps a bit of both. An intriguing color—hazel, he supposed—although she had scarcely paused long enough for him to be certain. Pity, he had always found knowing the color of a woman’s eyes to be most useful for spontaneous flattery.

Win suspected Lady Garret would not be susceptible to spontaneous flattery. In truth, there was a practical, no-nonsense air about her, vaguely reminiscent of a governess that said, far louder than words, that this was a woman not to be trifled with. “No, I most certainly was not.” 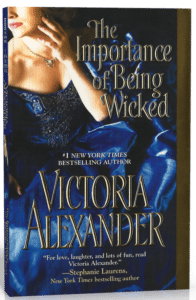