The Pursuit of Marriage

“The power of women to influence king, country and all of mankind cannot be underestimated. It is a power at its greatest when it is exerted subtly, in a clandestine manner and achieves it purpose before its existence is so much as suspected.”
T. Higgins

“I must say, I am deeply disappointed.” The Duchess of Roxborough gazed over the ladies assembled in the parlor at Effington House and heaved an overly dramatic sigh. “We are failing in our responsibilities, ladies, and we simply must do better.

“In the year or so since the formation of The Ladies Society for the Betterment of the Future of Britain, our various members have assisted, as it were, in the forming of a mere three unions.”

Marian, Viscountess Berkley glanced at her very closest friend, Helena, the Countess of Pennington or rather now, thanks to her son’s marriage, the dowager countess.

“That of Lord Pennington—”

Helena smiled in a most gracious manner that didn’t appear the least bit smug unless of course, someone knew her as well as Marian did. Marian was well aware of how terribly satisfied Helena was by the results of her machinations last year that had finally brought her son to the altar. Oh certainly, there had been a fair amount of deceit involved on Helena’s part, quite monumental by some standards, but she firmly believed, and as her dearest friend it was Marian’s duty to share that belief, that she had simply nudged events in the right direction. Helena claimed what happened after that could well be attributed to fate.

Lady Heaton, mother of the aforementioned Miss Heaton beamed with the pride of accomplishment.
” Thanks to an overly impressive dowry and the threat of a fair amount of scandal,” Helena said under her breath to Marian.

“I think scandal is highly underrated as a tool to encourage marriage,” Marian whispered. “We should employ it more often.”

Lady Putnam smiled weakly. If anyone was well aware of the role of scandal as an inducement to wedded bliss it was Lady Putnam whose daughter Althea was involved in a rather flagrant misadventure with a young lord, ending in a quick trek to Gretna Green and a hasty wedding.

“I’m not sure if Lady Putnam deserves the credit for that marriage,” Marian murmured. “Or the blame.”

“Perhaps ladies, we have forgotten the very reasons for these gatherings.” The duchess’ brows drew together in a most reproachful manner. “We are here for the express purpose of assisting our marriageable children in the finding of suitable matches, without their knowledge of course. As we are all well aware, young people today do not appear to be pursuing marriage as actively as they should. Indeed.” The duchess’ gaze settled on her sister-in-law Georgina Effington, Lady William. “Some seem to be pursuing anything but marriage.”

Lady William stood and smiled uneasily at the assembly. “As some of you probably know, my daughter Cassandra has discovered a talent for the refurbishment and redecoration of houses.”

“She’s really quite wonderful,” a lady behind Marian whispered.

“And while I am confident she wishes to marry, I fear this pastime of hers—”

“It’s scarcely a pastime given what she charges,” another woman murmured. “Still, well worth it to say your designer was an Effington.”

” –will keep her too occupied to see potential matches that may present themselves. In short, while I have always encouraged a certain amount of independence in my daughters, I fear for her future. Indeed, I think her actions might well be in opposition to the stars themselves. Therefore,” Lady William heaved a heartfelt sigh, “I am more than willing to entertain any proposals or suggestions.”

“Excellent, Georgina.” Her Grace beamed at her sister in law. “Cassandra well deserves a good match and I daresay there are any number of possibilities represented in this very room.”

A wave of enthusiastic murmurs swept around the room.

“Marian.” Helena considered her friend thoughtfully. “In spite of this venture of hers, Cassandra Effington would be an outstanding match for any young man.”

“Indeed she would,” Marian murmured. “And, given her heritage, an excellent viscountess as well.”

Certainly, nothing Marian and her friends could possibly do would ensure such a match. There were no real guarantees in endeavors of the heart. Given that, was there any real harm in nudging things in the right direction in the hopes that fate would then take a hand?

“Lady William.” Resolve brought Marian to her feet. “I have a house sorely in need of refurbishing. And better yet,” she flashed the assembly her brightest smile, “I have a son.” 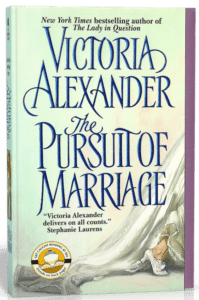