Good day. I am Lady Wilhelmina Bascombe, Viscountess Bascombe although, if one wishes to be fussy about it, I suppose I am the dowager Viscountess Bascombe. However, as my dearly departed George had no heirs, I suppose dowager is unnecessary. Pity really, I had expected there would be children at some point. But George is gone and with him that possibility. Which is not to say I would not like to have children someday just as I would like to have another husband as I quite enjoyed marriage. And really, who wouldn’t have fun married to George?

George and I were married for ten years, years filled with adventures and amusement. While our primary residence was the country house that was part of George’s inheritance—the bulk of his inheritance as I recently discovered—we were rarely there. We had a number of like-minded friends and much of the year was spent either flitting from house party to house party—from summer sojourns on Lake Windermere to autumn hunts in Yorkshire—or residing in London in the modest house my grandmother left me in a neighborhood more respectable than fashionable. Whenever I mentioned that perhaps we should purchase a larger residence so that we could better entertain, George would dismiss the idea for one reason or another. Fool that I was, I accepted his reasoning without question but then I accepted a great deal about life with George.

It has only been since his death that I have at last realized, or perhaps acknowledged, that the life we shared was somewhat irresponsible and completely frivolous. But did I mention that it was fun? It was a great deal of fun and I do rather miss it. Although I suppose knowing what I do now—even if George was alive—I could hardly return to a life of little more than fun and folic. It appears losing my husband has forced me to become a practical, sensible adult. Not my first choice but there you have it.

Life continues and so shall I. I have mourned George for nearly two years now which, in some respects, is more than he deserved, and might have continued to mourn had it not been for the realities of my new life. Although quite honestly I have always considered the rules for mourning—length one should withdraw from society, how long to wear complete black or partial black and all the other myriad and sundry directives—to be ridiculous. Mourning should come from one’s heart and not be a requirement of proper behavior. Admittedly, with my fair hair and even features, I look absurdly good in black but I would much prefer to choose black rather than have black thrust upon me.

I do realize that at this point you may well be thinking that I have digressed from the matter at hand which is my introduction. To that I say au contraire. Who I am simply cannot be separated from my experiences. Why, I could tell you that I am of average height with hair more blonde than red—something of a golden color I have been told—nicely vivid blue eyes—gentlemen have called them enchanting—and a fine figure well suited to current fashions. I would say most consider me quite lovely.

I have always been strong-willed and perhaps a bit stubborn. While I am cognizant of society’s requirements for proper behavior, rules of any kind do tend to make my teeth clench. My mother died when I was very young. I scarcely remember her at all and I spent much of my childhood residing with my maternal grandmother. She died shortly after I was sent away to school and I miss her to this day. I married at age nineteen over the objections of my father—the Earl of Hillborough and perhaps the stuffiest creature I have ever met. He promptly disowned me although I was essentially disowned when I was not born male. Father has never forgiven me for that. And I have never forgiven him for everything else including the fact that in his objection to George he was quite possibly right. Suffice it to say, I shall not go running to my father now although one might say he does owe me a dowry. I could certainly use it.

After George died in an absurd boating accident (the details of which I prefer not to discuss at the moment) I fled to a village in Wales and the home of my grandmother’s long-time companion, Lady Plumdale. She is a kind and loving soul and was my grandmother’s dearest friend. I stayed for more than a year and contemplated my life. My friends would have found it absurd as I had never contemplated anything before but when one loses a husband in an absurd boating accident, contemplation does seem to be appropriate. I came to some rather startling realizations.

George was my dearest friend and I did love him but I am not certain he was a great love or grand passion or soul mate although we were very much alike. I would not have noticed any of that had he not died. I also discovered that while there were any number of calls and notes of condolences immediately after George’s death, none of our friends felt it necessary to inquire after my well-being beyond laying him to rest. There were no letters, no well-meaning invitations, no beseeching me to return to society. It was most annoying. My only regular correspondence has been from my godmother Mrs. Persephone Fitzhew-Wellmore.

Even more upsetting was the revelation about our—or rather my finances. George apparently had a substantial fortune at one time but did nothing to replenish it. Even as bad as I have always been at figures and finances, I do realize that is not at all wise. You can imagine how surprised I was to learn we have lived almost entirely on credit in recent years.

I am now forced to determine how I shall survive. Short of marrying a man of means, I have few options.  I have sold the country house with most of that money going to pay our numerous debts. The jewels given me by my husband are—much to my surprise and dismay—for the most part paste and I have discovered a valuable painting my grandmother left me was apparently used by George as collateral for a loan. The current holder of the painting resides in Italy. While I have enough to repay the loan I do not have the funds required to travel. But that painting is my salvation and I must recover it. Selling it will provide financial solvency for my immediate future.

I refuse to allow my circumstances to change my nature. I will never be overly serious. I will always pick and choose the rules I intend to follow. I believe laughter is the best medication for any ailment. I feel life is to be enjoyed and I fully intend to do so. If, of course, I can find the funding to pay for it . . . 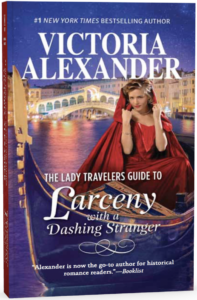