an excerpt in which a gauntlet is thrown or at least dangled . . .

He wondered what she would do if he were to pull her into his arms. It would be highly improper. They were indeed very much strangers at the moment.

“What?” He couldn’t recall ever having kissed a stranger before. It held a great deal of appeal. Especially in regards to this particular stranger.

“If it is dependent on me.” She pulled her hand from his. “Or on something else. Forces already set in motion.”

He raised a brow. “You mean fate, destiny, the ordination of the stars, something like that?”

“Actually I was thinking more in terms of desire, need, unadulterated lust.” A grin sounded in her voice.

“Lust?” He nodded slowly, ignoring a moment of surprise at her words. He had flirted with any number of women in his life, often with the explicit goal of eventually sharing their beds, yet he wasn’t certain he had ever met a woman whose nature was quite as direct as Lady Chester’s. It was most intriguing. “Lust can indeed be a powerful influence.”

“And dangerous as well.”

“I would certainly never force my attentions upon you.”

“That is not the danger that concerns me.”

“Or call on you if my presence was not wanted.”

He leaned close and lowered his voice. “Or drag you into you my arms and kiss you until you begged for more unless I was confident you wished to be kissed.”

“A wish prompted, no doubt, by lust.” She heaved a heartfelt sigh and trailed her fingers lightly over the lapels of his coat. “As I said, a very dangerous emotion.”

“And yet,” he caught her hand, “not especially unwelcome.”

“No, my dear Lord Warton,” she reached upward and brushed her lips across his so lightly he wasn’t sure they had touched at all, then stepped away before he could react. “Not at all unwelcome. Besides, it is the element of danger that makes it all so much fun. Don’t you agree?”

“I do.” He resisted the urge to make good on his threat to kiss her. He wanted nothing more than to feel her lips pressed against his and was confident she wanted the same. But there was something altogether too exciting about this game played between them on a darkened terrace in the cold of a winter night to allow it to end too soon. It was a tantalizing first course, an enticing prologue, a promise. And as such far too tasty to rush. “In that case,” he chose his words with care, “if indeed you and I choose to fall prey to the demands of lust or fate or whatever else we wish to call it, do I have your permission to call on you? Would you do me the honor of joining me for supper? The day after tomorrow perhaps?”

“I fear I am otherwise engaged the day after tomorrow.”

“The day following that then?”

She shook her head. “I have a previous commitment.”

“Fours days from now then. Or five. Or next week if it suits you better.”

“Is this the persistence you mentioned earlier?”

He flashed her a grin. “Do you like it?”

“It is most impressive. Very well then, shall we say five days from now?”

“Excellent. I shall send a carriage—”

“On the field of play of any sport is it always best to have the home court advantage.”

He laughed. “And I have always relished a good game. I shall count the days. Now,” he offered his arm, “it is entirely too cold for us to linger here any longer. I fear we shall soon loose all feeling in various appendages.”

“Odd, I had not noticed the cold until now.”

“You were no doubt basking in the warmth of my presence,” he said, a feigned note of humility in his voice.

“Yes, I’m certain that was it,” she said lightly then paused. “You’re not at all as I expected.”

“I haven’t decided. Besides, if I said yes it would go straight to your head and I fear that would only exacerbate an already serious flaw in your character.”

“We can’t have that.” He chuckled. “May I escort you back to the festivities now before we both freeze to death?”

“Festivities might not be quite as appropriate a word as sentence although bearing up under the offerings of Susanna’s—Lady Dinsmore’s—assorted nieces and nephews is a small enough price to pay for the privilege of her friendship. She entertains a great deal and the diverse nature of the company she gathers is always interesting even if the entertainment itself leaves something to be desired. I would never tell her that, of course. However,” she shook her head, “I think it’s best if we each returned as we left. Alone that is.”

“Surely you are not afraid of what people might say if we appeared together?”

She laughed. “I am not the least bit afraid of what people might say. Goodness, I am often disappointed that they do not say nearly enough although admittedly the tales of my exploits are somewhat exaggerated.”

“And that does not bother you?”

“Not at all.” She waved off his question. “If one is going to have a reputation it might as well be as interesting as possible. Besides, I have not completely fallen off the edge of respectability.”

“Ah yes, you are discreet.”

“Indeed, I am. I enjoy my position in society and I should hate to forfeit it with unduly scandalous behavior.”

“Precisely. It’s remarkable how forgiving society can be when one has a tidy fortune as long as one is not too outrageous.” Her voice carried an almost prim note but he suspected she was holding back a laugh. “I have the wealth left to me by my parents and my husband. I have as well the freedom to do exactly as I please and the intelligence to understand what will be overlooked and what will not.” She paused. “I freely confess there are certain boundaries I have never, nor will I ever, cross.”

“Ah-ha! At last. Confession.” He chuckled in a conspiratorial manner. “It feels good doesn’t it? The unburdening that is.”

“A great weight has been lifted from my shoulders,” she said wryly. “As I was saying, I am not afraid of the talk that will ensue if we are seen in one another’s company but rather the commitment such an appearance would imply.”

“I shall look forward to our evening together, my lord,” she said brightly in a manner that made him wonder if she would now pat his head as one did to appease an annoying child. “Now, if you will excuse me.” Lady Chester turned and started toward the door.

“One moment if you please,” he said quickly.

She paused and glanced at him over her shoulder.

“You do understand, I fully intend to seduce you.”

“Do you?” Her laugh was rich with delight and anticipation.

“Indeed I do. Furthermore I suspect, no, I am confident, that thought does not displease you.”

“Are you certain your confidence is not misplaced?”

He flashed her a wicked grin. “My confidence is never misplaced.”

“Still, if I were to confirm your suspicion it would take away any sense of challenge you might feel and it is my suspicion that you are a man who quite likes a challenge. No,” she paused to emphasize the word, “mystery.”

“Challenges perhaps but I’ve never been overly fond of mysteries.”

“Then I shall take some of it away for you. Consider it, oh, say, a gift of sorts.” She opened the door then looked back at him. “The appropriate word is not if, my lord, but when.” 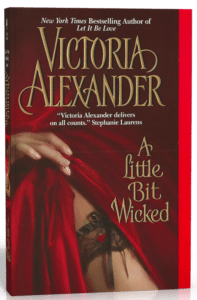